The Ride for Fuel is an unashamedly difficult ride. It’s about finding your limits, relying on your mates and suffering so that MAF can help ease the suffering of others. The 2017 route is no different. While there are slightly fewer kilometers than the 2016 route, the Snowy Mountain High has just as much vertical gain, so bring your climbing legs!

In past additions we have offered a B route on some stages. It’s made the ride accessible to more people and has allowed even the most hardened KOM the chance to have a slightly easier day should the body not be cooperating. This year we hope to have three bunches and to cater for the variety of riders we have created different routes on some stages.

It’s going to be a great 6 days exploring some of Australia’s most scenic and challenging cycling roads. This is going to be one you don’t want to miss. 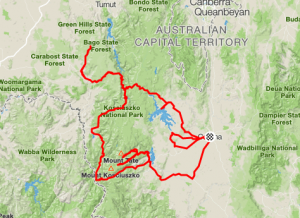 Day 1 of the 2017 Ride for Fuel sees us traversing the beautiful Monaro Plains. This region of rolling grasslands should give us a great chance to get the pistons firing without doing too much damage. This will also give you a chance to size up the other riders and find the bunch that you’re best suited to.

Heading west out of Cooma, we hit our first climb of the day after only 500m. Although The Royal is a Cat 3 (3.7km @ 5%) there are no KOM points on offer giving us a good chance to turn the legs over and warm up on what will probably be a chilly start. From here we encounter a series of long undulations as we follow the main drag until turning right onto Rocky Plains Rd and then right again onto our next catagorised climb, Middlingbank rd (10.5km @ 2.5% incl 1.6km @ 6%) which is either a cat 4, 3 or 2 depending on whose KOM equation you trust… After Morning Tea at the top of Middlingbank Rd the C bunch takes the most direct route to Adaminaby while for the A and C bunches it’s an undulating downhill run along Slacks Creek Rd back towards Cooma before we swing North and towards Adaminaby. At the 70km mark The Lynch Pin (2.4km @ 4%) provides the appetiser before the main climb of the day the Cat 2 Muniong Gate (9.5km @ 3.8%) which kicks after 77km. After a quick regroup it’s a easy downhill run to Lunch under the watchful eye of the Big Trout in Adaminaby. For the B and C bunch this is the end of the line for Day 1. Time to get a weak soy latte and vanilla slice. For the A bunch, caffeine will have to wait as it would be rude to ride all this way and not visit Old Adaminaby. The road climbs up for 8 or so km offering those brave enough to venture beyond the pit-stop stunning views of Lake Eucumbene. After rolling back to town that coffee will taste so much better for those that can say veni, vidi, vici! 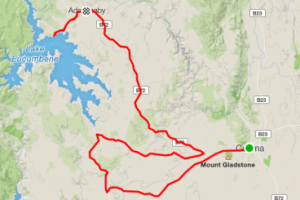 There are no shortcuts on Day 2! At 150km for all comers it’s going to be a long day in the saddle no matter how you cut it. But take heart, with only one really significant climb and plenty of awesome scenery to distract you it shouldn’t hurt too much. That being said, the first leg of Day 2 is lumpy enough to remind you that your legs are still a little tender from yesterday. Straight out of Adaminaby we hit our first catagorised climb, the imaginatively named Snowy Mountains Highway Climb (Cat 4 2.4 @ 4%). Then at the 13, 23, 29 and 44km mark we hit the even more imaginatively named Snowy Mountain Hwy 1 (Cat 4 1.8 @ 5%), 2 (Cat 3 2.8 @ 6%), 3 (Cat 4 3.1 @ 5%) and Kings Cross Rd (Cat 4 1.2 @ 6%) before morning tea overlooking Three Mile Dam. The next 25km will be a welcome relief with an altitude drop of 900m only punctuated by the Link rd climb (Cat 4 1.9km @ 7.8%) at the 50km mark. What goes down must come up and a big chunk of those meters will be regained on the Elliot Rd Climb (Cat 2 7.5km @ 7.6%) at the 72km mark. After a regroup it’s pretty much all down hill to Lunch and a quick bush walk to see Paddys River Falls at the 106km mark. After lunch we wake up the legs with the Paddys River Climb (Cat 4 1.5km @ 6.4%) straight away. After a few undulations we pass through Tumbarumba and begin the long grind up to our finish point. At the 130km mark the road starts rising in earnest as we hit the Laurel Hill Climb (Cat 2 10km @ 2.5%). This gentle rise takes us part our accommodation point (allowing those who have had enough to eject early) on on to the beautiful township of Laurel Hill where we take our second bush walk (trust me, it will be worth it) for the day to explore The Sugar Pine walk. After the obligatory cafe stop in Laurel Hill it’s a gentle rise then fall back to our accommodation. 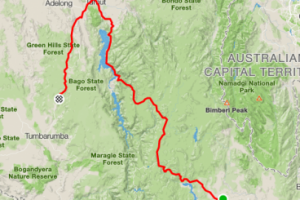 Day 3 we take a ride on the wild side as we go deep into the Kosciuszko National Park. With nowhere to stop for a latte you’re going to really appreciate our awesome foodie crew. We start off by retracing the last leg of Day 2 so all those beautiful long gentle descents become climbs. First up is the double climb of Tooma rd (1.8 @ 4.9 followed by 1.5km @ 7%) which are both Cat 4. We say goodbye to the C bunch who take the more direct route to Khancoban as we head deeper into the wild. After a short descent we hit the Cat 2 Elliot Way Climb (16km @ 3%) which, while it is only 3%, has some long sections in the 6% zone to get the blood pumping. Following a beautiful long descent to the Talbingo River we stop for morning tea on the banks of the river at the 63km mark. The first HC climb of the Snowy Mountain High, the Cabramurra (21.2km @ 4%), starts as soon as we swing a leg over after morning tea, although the first 8km are very gentle at 2% giving you a chance to get the legs going and the food digested before we hit the more challenging middle section that averages 8% for 8km with some kilometers averaging up to 14%. After regroup at Cabramurra, the Highest town in Australia, for a quick refuel and to take in the great view it’s another great descent to Tumut Pond and back up the other side care of the Cat 2 Tumut Pond Climb (4.9km @ 8%). After a welcome 8km of undulations on top of the plateau we drop down towards lunch with only a cheeky Cat 4 unnamed climb (.9km @ 9%) to contend with. After Lunch overlooking Tooma Reservoir we continue the long descent towards the Victorian border, dropping 900m over the last 33km. That being said, we still have 2 more cheeky little Cat 4’s to deal with as we warm up after lunch with the Tooma Reservoir Climb (1.9km @ 4%) and at the 131km mark the Swampy Plains Creek Climb (2.4km @ 4%) before the long wind down to Khancoban and a well deserved frosty one by the Lake. 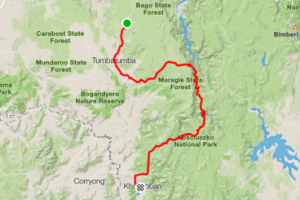 For the C bunch, Day 4 is the Queen Stage of the Snowy Mountain High. If today’s route isn’t on your bucket list, it should be. Considered one of Australia’s classic rides due to the stunning scenery and high degree of difficulty, today is all about 2 beefy climbs and you don’t have to wait long before the fun starts! After a 2km warm up we hit the lower slopes of the Cat 1 Scammel’s Climb (14.6km @ 4.6%) and while it looks friendly on paper the 1km descent half way up makes it look a whole lot easier than it is. The hardest part of the climb comes early on with a 4km section of 8%. After a quick regroup at the lookout it’s an 8km descent and a few undulations before morning tea on the banks of the Geehi River at the 32km mark. Straight after the break it’s another climb that is less friendly than it looks… The Cat 2 Swampy Creek River Climb (8.8km @ 4%), while not nearly as nasty as what has passed or what is to come, will still take some beating. Next on the Menu at the 53km mark is one of the hardest climbs in Australia. Dead Horse Gap sounds formidable on paper but in reality it’s a whole new world of pain, especially the 3 or 4km where the % hovers around the 13% mark. As you reach the top you’ll really feel like you’re in the alpine zone as the vegetation changes and the temp drops. After a regroup at Dead Horse Gap we’ll roll down the hill to lunch at the 78km mark on the banks of the Thredbo river in the middle of the ski resort. With the bulk of the hard work done it will be a very welcome easy spin (or fast and furious descent) down to Jindabyne with the Cat 4 Ski Tube Climb (2.3 @ 5%) the only obstacle to overcome. 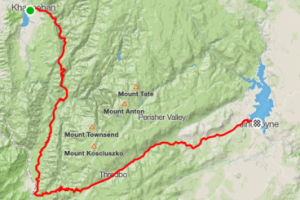 It’s hard to know what to call the Queen stage of the Snowy Mountain High and while Days 2, 3 and 4 all made a very good cases for themselves. However, with superior altitude gain, length and prestige, Day 5 surpasses them all, that is if you don’t pull the pin early… The first behemoth on the menu is NSW’s premier HC climb, Charlotte Pass (32.2km @ 3%) at the 9km mark. The first 13km of the climb is the most consistent, averaging 5.2%, then from the top of Rennix Gap the climb undulates until it finally peaks out at 1850m. Hopefully it’s not too cold and we can have some morning tea at the Cima Coppi (high point) of the 2017 route. From here it’s a choose your own adventure. I’ll be taking a side trip to conquer the Cat 3 Guthega Rd Climb (3.6km @ 6.9%) before making my way back down to lake level and Lunch at the beautiful Thredbo River Campgrounds. At the 89km mark the adventurous will make a right turn and hit Dead Horse Gap from the north, which, according to Strava doesn’t deserve a catagorisation (due to its average gradient being less than 3%) but at 35.7km with lots of up hill I’m going to say it deserves at least a Cat 1! After a regroup we do as we did 24 hours earlier and tuck in for the long, beautiful, sweeping descent back to Jindy, content in the knowledge that we have conquered everything the Snowy Mountains can throw at us. 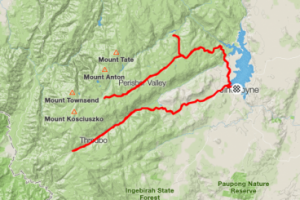 Day 5 is a great chance to spin out the cumulative damage of the last 5 days as well as cementing the great friendships you’ve forged through the bond of battle. Our route takes us on a looping journey through some beautiful historic towns as well as the stunning rolling countryside of the Monaro Plains. We start off with a few short uncatagorised climbs before we hit the first climb with points on offer the Snowy River Way Climb (Cat 4 2.7km @ 4%) which is part of a longer drag of 9km @ 3% up to the top of Beloka Mountain. After a steep descent to Beloka those with a penchant for super hard climbs can turn around and ride back up the Cat 3 Beloka (3km @ 9.4%) made famous by Le E’tape de Tour. For everyone else it’s an easy roll down to Dalgety for morning tea by the Snowy River at the 35km mark. After the break we warm up with 7km of gentle up hill out of the Dalgety Valley until we descent for 3km before hitting the Cat 4 Maffra Hill (2.3km @ 5%) at the 45km mark. Turning north towards our final destination we roll down into the Bobundra Valley before ascending the other side on the Bobundra Climb (Cat 3 6.8km @ 3%) at the 55km mark. From here it’s all plain sailing to Cooma. We hit one final climb out of Cooma to celebrate our achievements overlooking to Snowy Mountains from the top of the Cat 3 Mt Gladstone (5.1km @ 5%). Job done! 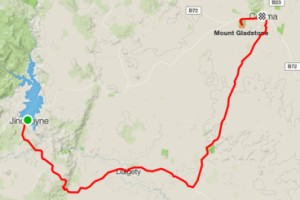