The Ride for Fuel has travelled far and wide to take on some of the best cycling Australia has to offer, but sometimes the best-kept secrets are in your very own back yard. The majesty of the South Coast will soon be revealed to all as the Union Cycliste Internationale has awarded the 2022 World Cup to the region due to its breathtaking scenery and challenging parcourse.

The Illawarra Escarpment hugs the South Coast, creating a cyclist wonderland of formidable rocky outcrops, luscious rainforest, beautiful beaches, and verdant rolling farmland. It’s a feast for the eyes and the legs! There are so many mouthwatering rides in a 200km stretch of coast that for this year we are trying something a little different; rather than a point to point ride, we will be basing ourselves in beautiful Kiama and from there heading out in different directions to well and truly explore this cycling gem.

You’ll notice that the following route guide describes the A and C routes but has no mention of the B route. Without being too prescriptive, the B route is whatever the bunch wants it to be. It could be following the A route on some days and the C route on others. It could also mean doing the A route but not at the same pace as the A bunch.

Heading off from the southern fringe of Sydney, it’s only a few short km before we get out of the city and into nature. It’s also not long before we hit our first climb of this year’s tour- the short but sharp Artillery Hill (Cat 4 1.27km @ 9.1%). From there we work our way through the Royal National Park (Australia’s Oldest) until we hit two long drags, Sir Bertram Stevens (Cat 4 4.95km @ 2.6%) (Bert was a Former Premier of NSW for those of you playing at home) and the Otford Climb (Cat 4 4.41 @ 2.6%) made famous by the annual Gong Ride.

Following The Gong route, we cross the Sea Bridge and hug the coast until we hit our first true test of the ride, Bulli Pass (Cat 2 3.45 @ 9.5%) before a well earnt morning tea by the sea at Bulli Beach at the 60km mark. After a 15km to digest and get the legs going again we pass through Wollongong and take on a climb that is sure to feature in the worlds, Mt Keira (Cat 2 5.82 @ 6.4%). With a quick stop at the lookout to survey the northern expanse of our territory for the week we head south and down another of the northern escarpments finest, Mt Kembla. We park up for lunch in Figtree on the southern fringe of Wollongong before venturing south into the rolling hills of the Jamberoo Valley.

After the cheeky little Mt Terry (Cat 4 1.21 @ 7.1%) we hit the last and possibly the dirtiest (figuratively and literally, it’s a renowned dairy area) climb of the day, Saddleback Mountain (Cat 2 4.67 @ 8.4%). From there it’s an easy roll down to Kiama for a strong piccolo and a vanilla slice or a rejuvenating dip in the Pacific. 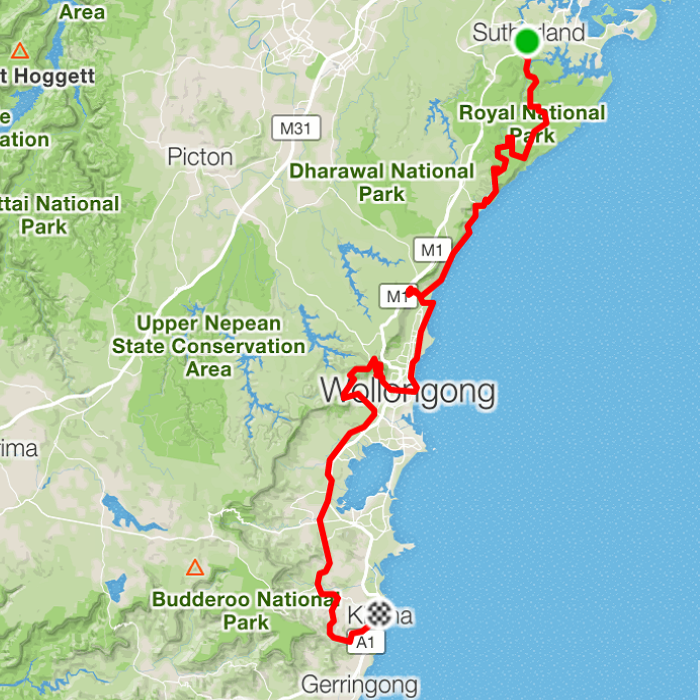 Rolling out from Kiama we warm the legs up with some rural undulations in picturesque Jamberoo Valley before hitting the king of South Coast climbs, Macquarie Pass (Cat 1 12.4 @ 6%) at the 39km mark. It sounds like an easy enough proposition. however, the bulk of the climbing is packed into the front end so you’ll need your climbing legs. It eases up in the last few kilometres as we get our first taste of Southern Highlands farmland before we regroup at the famous Robertson Pie Shop and yes, there might even be time for a pie… Heading off the main drag we find ourselves on one of the most beautiful roads I’ve ever ridden.

With views over the rolling Southern Highlands to the west and the coast on the east, you’ll be tempted to do a few laps. Nevertheless, there is still plenty of work to do so we will be soldiering on. We drop into Kangaroo Valley before hitting our next climb of the day, Cambawarra North (Cat 2 4.3 @ 9%). It’s not too long but at 9% it will certainly take some beating. We roll down into the Shoalhaven Basin, stopping at the town of Cambawarra for a well-deserved lunch. After lunch, it’s a choose your own adventure. The A Route does 2 out and back climbs, first up is the Pyrenees & Emerys Rd Climb (Cat 2 5.9 @ 6%) which is more like three nasty 1km climbs joined by stretches of undulations. Keep something in the tank for the last kick up Emerys Rd… The second being Browns Mountain (Cat 2 3.7km @ 10%) which will sap whatever strength you have left with long stretches where the grade is in the teens.

Thankfully the last 45km will give you plenty of time to spin out the damage as we cruise along the coast back to Kiama, with just a few little kickers to make sure you’re done as we arrive home. 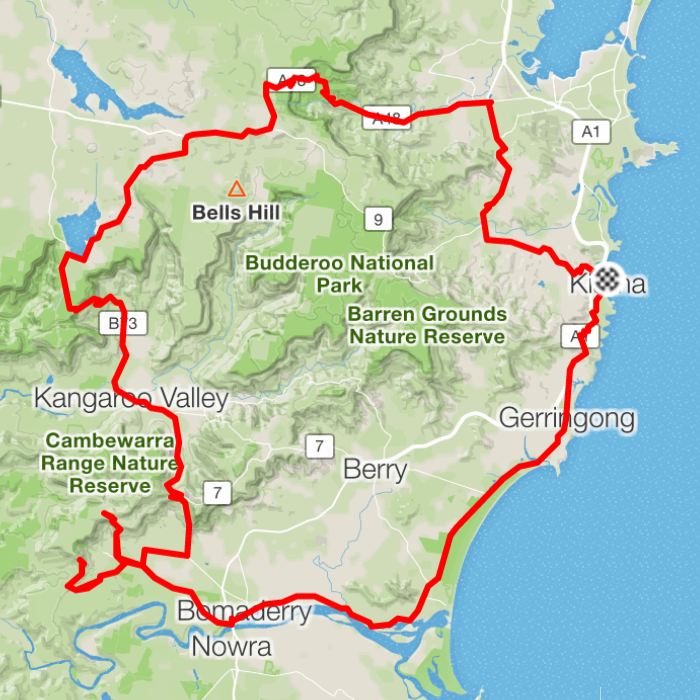 Heading south from Kiama we’re bound to get some spectacular views as we skirt the coast encountering Gerringong and Gerroa before heading inland to Berry. After a quick refuel, we begin our assault on the Cabawarra Range which translates to Mountain of Fire in the Dharawal language.

First up is Berry Mountain East (Cat 2 12.8km @ 4%) which sounds easy but with the first 3km averaging over 10% and two days in the legs, you’ll feel this one a little. Turning left on Tourist Rd we continue climbing up the ridge towards Cambawarra Saddle before heading west into Kangaroo Valley. We loop back and take on the western side of Berry Mountain (Cat 2 5.22km @ 8%) which passes through some lush rainforest before popping out into a beautiful rural enclave on top of the ridge. After descending back into Berry we get 10km of respite as we head south to Cambawarra and our last ascent of the Mountain of Fire, Cambawarra East (Cat 2 5.20km @ 8%).

After another beautiful descent into KV we park up in town for a lunch by the river. With 3 out of 4 climbs done you might feel like the afternoon session will be easy but we’ve saved the best until last! Barrengarry Mountain (Cat 2 7.64km @ 7%) is one of the best climbs in NSW with sweeping views back over KV, a road surface from heaven and a level of difficulty that will make you wonder how it is only Cat 2… If that all sounds a little traumatic, don’t fret, we’ve got 35km of Southern Highlands serenity to sooth the legs and clear the mind before we swoop back into Kiama via Jamberoo Mountain for a cool beverage and warm shower. 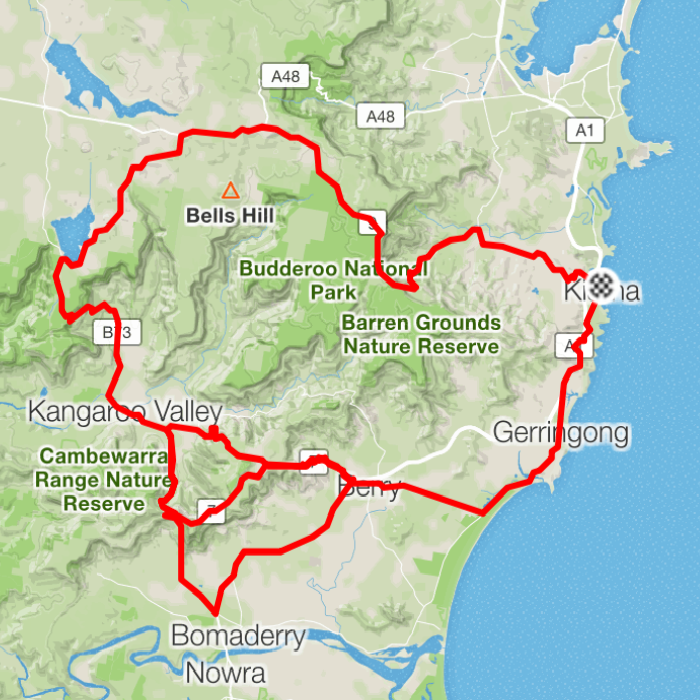 After bidding farewell to Kiama we head west up Saddleback Mountain (Cat 2 6.20km @ 8%) and on to the lookout (.50km @ 17.9%). After descending into and through the Jamberoo Valley for the last time we head further west to the Highlands via the Jamberoo climb (Cat 2 6.45km @ 9%).

By now you’ll be used to the steepness of the South Coast climbs, but with 2km above the 12% mark this one is one of the most challenging. After a refuel, we head further west to indulge in one of the most beautiful stretches of road I’ve ever ridden, the Kangaloon Loop. After a 50km tour of the Southern Highlands, we drop back down into the Illawarra Basin for lunch in the Albion Park hinterland. Heading North we venture back into UCI Worlds territory with our last climb of the tour up Mt Kembla (Cat 2 6.4km @ 8%) which is more like 4 steep ramps joined together with false flat. We ride along the escarpment before reaching the Mt Keira Lookout to survey the territory we have conquered and to take the obligatory team shot before rolling back into Wollongong for the finish at Flagstaff Hill overlooking Wollongong Harbour. 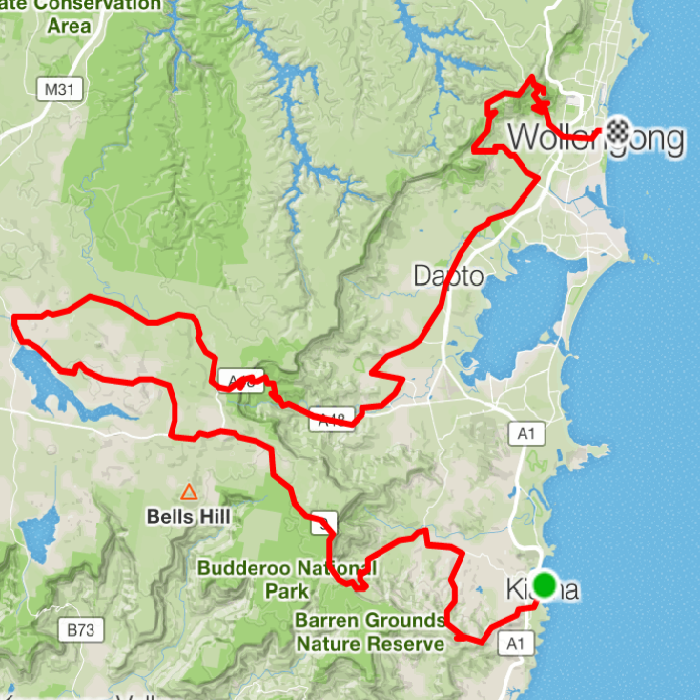